The Strong Black Man Is Alive!

The now-famous piece of writing from the late 90's by author Daniyel Willis, entitled "The Strong Black Man Is Alive."

In it, he basically explain what a man's prime purpose is still fundamentally TO HELP, PROVIDE, AND TEACH women as the male once were nurtured and cared for. Black men need to treat each Black woman as if she is his wife, sister or daughter. In short, how Black men feel about black women substantiates how they also feel about themselves having come from the Woman. 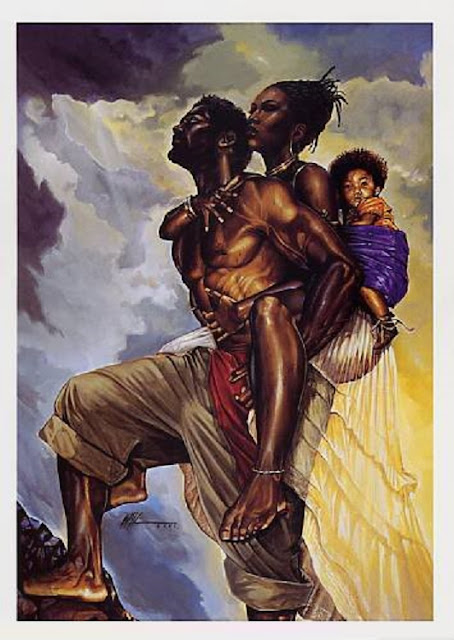 The Strong Black Man Is Alive

On December 22, 1993 at 12:30 a.m. while Striving with the Reality of being a Man instead of a Boy, the Strong Black Man was Brought Forth from the Womb, like a Thief in the Night!

Medical Researchers say He's Born of Mankind, but those who Know and OverStand him know He's Alive from being Calm when He could have been Loud, Smiling when He could have been Furious, being Well and wanting everyone to Know because his Comfort might InConvenience them, and an OverDose of other people Depending on Him when He had only Strength for Himself!


The Strong Black Man is Alive loving women who Love themselves and could only offer a Perfect Reflection. He's Alive Raising children and for doing a Complete job!  He's Alive from the Truths his Grandfather told his Father and his Father told Him about War, Separation, Hatred, and Racism!


The Strong Black Man is Alive being Sexually Praised as a God and Represents that Truth everywhere, everyday of His life eliminating the Humiliation for Innocence!  He's Alive being Well-Groomed by the Black Woman who declare to Love him and He allows the Grooming to go on to Show his Love, too!


The Strong Black Man is Alive from Inspiration, Swallowing down Pride from Acknowledgements HE keep to Display allowing Himself Serenity to Encompass anyone in His Circumference.  He s Alive being Responsible, meaning he`s Able to Respond to any situation when there's none other to Rely on!


The Strong Black Man is Alive from the Multiple Relations with Women he really wanted, but was forced to leave by the Intellectual Deceptiveness of those around Him! He's Alive being a Father at 20 and a Grandfather at 40, and the Forefather at 60!


The Strong Black Man is Alive standing up and not falling for anything! He's Alive knowing that Life is a Reality according to His Thoughts and Expectations. Therefore, He examines the Life he lives Carefully!


The Strong Black Man is Alive to Console Ms. Low-Self Esteem! He's Alive saying don't just have any man around the house! He's Alive to Please her because He learns what make her Body happy and He take the time to Teach her! He's Alive for Accepting Himself and for Respect to others! He's Alive from Truths of Accession because He Uplift the Black Woman!


The Strong Black Man is Alive from Race Memories of being Kidnapped and Marketed, meanwhile Worshipped, Deep-rooted, Delivered and Worked made him Stronger! He's Alive from tributes of His adversaries who unmatched his efforts unknowingly showering Him with Wise words and Glorious Songs!


The Strong Black Man is Alive from the Ancient Egyptians, Sumerians, Mohenjo-daroans, Harappans, and Cretans, Elamites, and Nubians Ties that would not allow other races to tie into the vine to eliminate Him! He's Alive from Opening his Third Eye in Accepting the Law of Reward and Punishment!


The Strong Black Man is Alive from always being what Women need and Provider for the Woman he want! He's Alive from being Black and Born Again for being Too Black! He's Alive from Motivation every time somebody thought of Him as only a Prince, or treated Him greater than a King.


The Strong Black Man is Alive from being Enlighten about his Power, his Soul, and the Domain of his Kingly Crown Abilities. He's Alive from his hands Reaching Out because He seeks to Help others who want to help themselves or leave them alone! He's Alive from Excellence in Maintaining his Composure in Birthing rooms and Equanimity in Abortion centers! He's Alive being Confident in Courtrooms knowing His Indigenous Rights is the Inalienable Right to make all decisions over Himself!


The Strong Black Man is Alive in Corporate America with Adrenaline running HIGH with Self-Respect and Accomplishment! He's Alive with Power, fighting War, Separation, Hatred, and Racism even when his Soul is leaving the physical and expands becoming One with the Universe.  And, sometimes when He's determine to live longer He refuse to give up!  He lives with the Sole Authority whenever History calls for an Eradicable Change in the Earth, The Strong Black Man is the Chosen One by All of Humanity!

Want more reading like this? BoysLieMenDont is building an online movement to support the elevation of Black America to a position of Group Prosperity, Respect, and Competitiveness. Purchase your copy of Boys Lie Men Don't - Conversations and Thoughts on Relationships to help us propose new principles, strategies and concepts that teach Black America a new way to see, think, and behave in race matters.

Thank you in advance your support. Please continue to visit our weblog for updates and invite

Dr. Daniyel to your next event.

Posted by Unknown at 8:34 AM No comments:

Today’s blog comes as the empowering founder of BLMD LLC Daniyel Willis, who gets candid with women who feel “less than” because they aren’t heard in a relationship. Too many women spend too much time putting themselves down just because they’re … well … not heard by men!

It happened again the other day. I was out at with group of women, some I’d never met, for a luncheon. Sure enough, it didn’t take long for the conversation to turn to men – who had one, who didn’t. The women who were married, engaged or “living together” didn't take the superior position over their men! It wasn’t because the married women don't want to be “top dogs” in the situation; it was because the women willingly gave up their power to be listened to.

I hate to go there but simply picture an encounter between two dogs at the dog park. One is standing tall wagging his tail while the other lies down submissively before it. Same dynamic I hear in those married, engaged or "living together." These ladies are in awe of their man but didn't act eager to learn the hidden secret that would make it possible for them to “have that voice” too. Nowadays, there’s everything right with wanting to have a long-term romantic relationship, especially when it’s coming from your true self and not a blind assumption and partnered is good. However, women will be their own worst enemy not recognizing our hormonal differences in this regard. It seems women spend more time stressing, being silent or framing their status in self-deprecating sarcasm when changing their conversational repertoire with their man eliminates stepping on each other's toes.

Well, just as the Music has changed means the Dance has changed, as the World has changed means the Roles have changed.  Allow me to share with the women... Men are about Action and Reward! When You let us Solve Problems, Achieve Goals, etc we are Stress Free! We have an "efficiency" gene... Never do Anything We don't have to! So, Ladies... You could easily get him to do anything you want (especially listening to you) by simply... Motivating Him!


Thank you in advance your support. Please continue to visit our blog for updates and
invite Dr. Daniyel to your next event!

Posted by Unknown at 8:46 AM No comments: